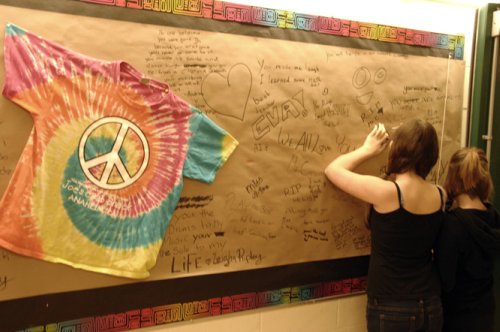 An outpouring of affectionate memories has swept the island this week following the sudden death of Bruce Creswick, a beloved teacher and director of the music program at Salt Spring Island Middle School.

Creswick’s unexpected passing at home on Saturday produced an immediate response from the community, many of whom remarked on his enthusiastic approach to teaching. Parents and students praised his ability to make a lasting impact on kids’ experience of music and education in general.

Creswick, 51, helped introduce music to a generation of island children, who picked up their first instruments or joined choir under his care. He was recently engaged in planning a school music trip to San Francisco in May, and helped form an instructional band for beginning, adult and youth players.

“My big thing that I believe is that music is a life skill because it teaches so many other skills,” Creswick told the Driftwood last August.

“I see my job at my school as being to plant the musical seed — and anything you can do to water it and to nurture it is fantastic.”

But his positive influence extended far beyond the music program. Creswick’s ability to reach students was reflected just as strongly in his math classes and as a homeroom teacher.

Lisa Halstead, principal of the middle school, said although she had known Creswick for just two and a half years, she felt like she was losing a family member.

“Bruce had an incredible impact on all of us, the staff and the students,” Halstead said.

Former middle school principal Kevin Vine posted the following on a Facebook site devoted to the teacher’s memory: “Bruce Creswick was one of those rare people whose compassion, kindness, enthusiasm, humour and talent made him one-of-a-kind.

“He made fond and indelible connections with virtually everyone who came to know him — and there were thousands. He is truly a legend in his own time.”

Salt Spring Concert Band director Dawn Hage said, “Bruce was both a colleague and a friend — I had the greatest admiration for his unflagging enthusiasm and ability to get the middle school-aged kids excited and inspired about all kinds of music.

“It takes a special kind of teacher to get the best out of kids at this time in their life when so much else is going on for them and he had the gift,” Hage continued.

“He would recognize a spark of interest or talent within a student and the next thing you know there was a bonfire blazing. Bruce touched so many people in our community and his energy, talents, kindness and generosity will be sorely missed. I still simply can’t believe that he is gone.”

People across the community are commemorating Creswick through his famous devotion to Converse running shoes. Middle school students who have the shoes are wearing them, and those who don’t were supplied with Converse buttons produced by Jo and Bob Twaites.

SIMS students have also been posting their favourite memories on bulletin boards around the school.

Halstead reported that the students are sad but are managing, with lots of extra support from counsellors and parents who arrived at the school on Monday to see what they could do.

Creswick is survived by his wife Carolyn, his son Matthew, who’s at GISS, and his daughter Catelyn, a middle school student. He also leaves behind a brother Mark and a sister, Kathy Webster.

Webster recalled in her posting to Facebook that her brother loved his job and received as much as he gave from teaching.

“Whenever I talked with my brother Bruce, he was like a ‘kid in a candy store’; always very excited with upcoming events he had planned for his students . . . I want you all to know how much you made a difference in Bruce’s life too; he thought the world of all of you.”

Return from Bruce Creswick to SaltSpring-Island.com


[?]Subscribe To This Site
Copyright SaltSpring-Island.com 2008-2022 All Rights Reserved Worldwide